Color image of the mural photographed in 2008 via yeoldeblackhippie on Flickr. 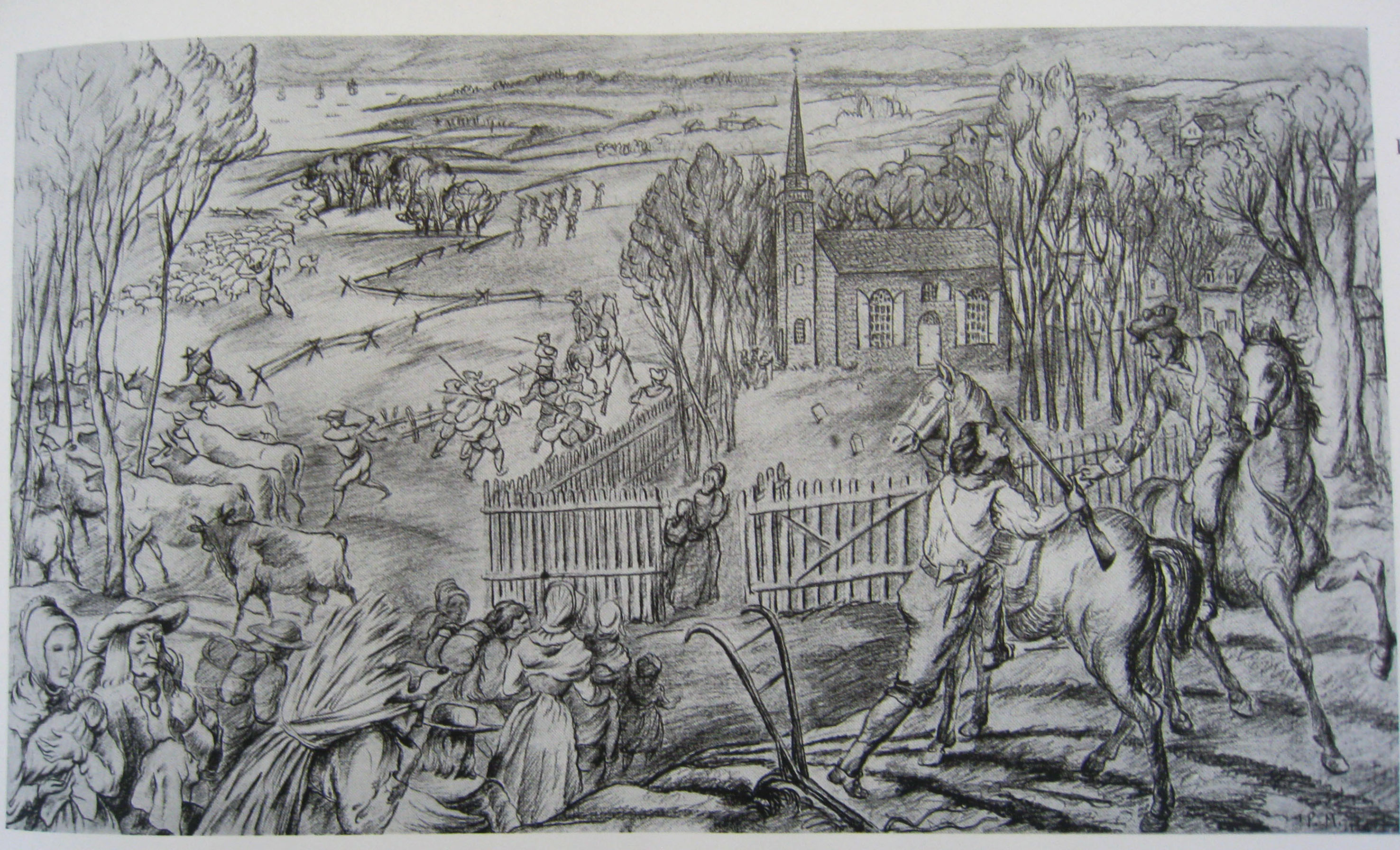 'Revolutionary War 1775, St. Georges Church in the Background', a sketch for a proposed mural for Hempstead Post Office from Art in Federal Buildings Volume 1, compiled by Edward Bruce published in 1936. The sketch shows Hempstead's hopes to have four murals painted by Mangravite.

Located on Long Island, Hempstead, New York’s Post Office was Mangravite’s first Section commission. He had not been the post office competition winner. Instead Edward Rowan selected Mangravite because it was felt that James Brooks, the jury selected artist, did not have the skills needed to execute the mural.1 The community themselves wanted a mural which would highlighted their history, events they viewed as playing an important role in the formation and success of the Country. In December of 1935 a letter reached Mangravite stating…

“I have heard from the Postmaster at Hempstead and I know that he and the Hempstead citizens are very much in favor of having the subject of the mural paintings for the Post Office local in character. You will find Mr. Hartnett and the other members of the committee extremely nice people and I would suggest if you have not already done so, that you see them.” 2

By January 20, 1936, Mangravite had returned from meeting with the mayor and the local committee of Hempstead and reported back to Section that it had gone well. The over which images to use continued in a conversation between Rowan at Section, the Hempstead committee and Mangravite in several letters. Ultimately Section would only cover the cost of two murals while the community hoped to raise funds and extend the series to include three more panels in order to include all the historically significant aspects they deemed important.3

While five mural sketches were included in the Section murals publication, only two murals were actually executed. One features the settling of Hempstead, which according to Hempstead Public Library depicts “the early settlement of Hempstead from the Indians, English landing in Roslyn and driving their cattle south to Hempstead, and the stockade in Hempstead." 4 The other mural is the arrival of British dirigible R-34 in 1919. The air ship had flown from Scotland to Roosevelt Field in Hempstead, New York in four and a half days. The airships journey was only one of several “firsts” which he could have selected including, the “first provincial legislature in the State of New York,” or “one of the first stage coach routes.” 5 Firsts were in fact a popular theme for the Post Office murals painted as part of the Section program. As Marling explains, this use of “firsts” in Post Office murals was because “the history of “firsts” constituted the modern folklore of a Depression epoch whose own firsts were liable to be on the order of record unemployment figures.” 6 The ability to connect a “first” to the town built communal pride and placed the town into the fabric of America’s success .Documenting these images in a public place acted as a gentle reminder of the greatness of the Country.The fact that the air ships arrival was also the first example of air mail was fitting for a mural on display in a post office.

The final mural composition makes it evident that Mangravite studied newspaper images of the historic event. The mural captures the action of the landing, cropping the airship and the men in a photographic style, which places the viewer within the cluster of men spilling out of the frame in the foreground. There is a sense that the air ship is floating above with its tail floating off the mural’s top boarder. The small figures of men in the distance pulling on the air ships tethers enhance the understanding of the machine’s scale. By placing the viewer in the airfield with the soldiers on the day of the R-34’s arrival Mangravite pulls the event from the past into the present day. The inclusion of a mail truck on the right side of the mural is the only reminder to the viewer of the postal connection.

America and the Airship

The foreground shows American military men pulling the air ship into place as the commander shouts through a megaphone. On a basic level the image is one of American and British government working together, operating a machine connected to war, a reminder of the strong American war hero. Importantly, these laboring men have transformed a machine of war into one which will create a prosperous future for the Country through connectivity with the world. This connectivity with the world through air mail was a historic moment that’s implications moved beyond Hempstead. Indeed, the landing of the R-34 was historic for the nation and represented both innovation and progress. At the time of the flight newspapers quoted the crew as saying “regular airship service between Europe and America is bound to come soon.” 7 The idea was forming that delivery of mail was only the beginning of the air ships’ usefulness. The crew stressed how this new means of flight was the future. It would not interfere with planes, but rather travel the long distances the planes could not. The entrepreneurial spirit of American Dream can be seen in the article. It states that the Americans saw the “commercial possibilities” of the airship. 8 Not to be lost in the glory of the moment the postal service was included with letters and newspapers which made the journey representing the hope that this trip would “prove the fastest newspaper delivery between New York and London yet accomplished and will be the forerunner of a regular interchange of mail.” 9

This achievement did not disappear from the minds of the Americans quickly; an Associated Press newspaper article written nine years later reminds us how significant the event had been. 10 The article places the R-34’s success as an event which was not seen again until 1927 with the Atlantic flight of Charles Lindbergh. In the 1920s and ‘30s the air ship in America was the future and Mangravite’s R-34 connected the historical past of Hempstead with the future of America. Even during the Depression the air ship was an icon of the optimism the future held. At the end of World War I the image of the air ship had moved from newsreels to the pages of magazines.

To look at the popular culture of the period this dream machine idea is clear. Publishers placed air ships on magazine covers including Popular Science in 1923 and 1928, Popular Mechanics in 1930 and Boys Life in 1931. 11 Magazines included drawings of the cabins and dining rooms on board the air ships along with stories of the machines future and progress. The postal service issued stamps depicted the different models and news reports tracked the various flights and technological advancements being made.The media in the United States and Europe had taken hold of the war machine and changed it into an icon of the mechanized age and connectivity. This ship was seen as part of a new international air mail system and a travel industry which allowed for travel to distant places. Most importantly in the United States it represented new industries for a nation in search of jobs.

Historical versus the Modern

Mangravite’s use of a historical image rather than a more modern version was more than a way of fitting this image into a historical event. Many artists included this icon of the future in their WPA murals, however in cases such as the inclusion of an air ship in August Henkel’s Floyd Bennett Airfield mural the results were not accepted by Section or the community. 12 The modern air ship in Henkel’s mural was connected to his "communist affiliations" and the image of Stalin in the mural ultimately lead to its destruction in the 1940s. 13 In addition negative connotations which were starting to mount particularly in connection to the German Graf Zepplin which was leading the way in the development of the air machines. However in the mid-1930s the growing concerns about the actions of The National Socialists Party and Hitler in Germany made the arrival of the German Graf Zeppelin at the 1933 World’s Fair in Chicago a sensitive affair. The air ships greatly anticipated arrival was dulled with its display of swastikas on its fins. 14 The new air ship was thus becoming a sign of the “New Germany” and Germany’s “reclaimed military prowess and Mangravite’s historical representation placed the air ship in safe period, away from any growing concerns.

To avoid any confusion or controversy Mangravite made it clear that the air ship he painted was the historical R-34. The air ships numbers were predominately displayed on its side positioned at the center of the mural. Mangravite’s interest in research and projecting the correct image is clear from his notes and letters, in a letter from March of 1936 he talks of the “tremendous amounts of research that has been necessary for the authenticity of my sketches.” 15 He researched the R-34’s arrival in old copies of The New York Times noting the images “striking view of the R-34” and important names which appeared in the paper from July 2 thru the 7, 1919. His brief notes include the fact that “twenty piles of gas cylinders waiting to supply the R-34”, a detail which is included in the murals foreground. 16 He even contacted the U.S. Navy for information on the air ship for help in getting the coloring on the air ships fins correct. 17 The Hempstead air ship was not a German machine, the carefully colored tail and historical setting removed any negative connotation. Unfortunately for history, this all occurred before the mural was hung in March of 1937. It was before May 6, 1937 when the image of the air ship changed permanently from a future of easy travel to one of horror and death as the Hindenberg crashed.